When this self-isolation began, I knew it would take a while for the Covid-19 virus to be contained and controlled.  I did not think of actual numbers, just "some distant day."  It's day 90, and while our governor has gradually eased restrictions, I'm still not ready to proceed unchecked into the day.  Masks, in my life, are a part of my life now.  In fact, the reminder note on the inside of my front door now reads "Keys,   Phone,    Pants,    Mask."  And I don't really see an end in sight, at least not until a vaccine is developed, tested, and is as widely available as the flu vaccine.

In the last 78 days since my last blog, much has happened in the world and in my 'hood.  The most striking is the protests against racial inequities.  We have over 400 years of racial inequity in this country; it was here at our first settlements, it was here and thriving during the American Revolution.  It was not eliminated by the Civil War - it simply changed it spots.  And today, we still see, DAILY, how we judge others and treat them according to what we have internalized.

I grew up in Virginia, with segregation, with Jim Crow.  Racial inequity was so ingrained in our daily lives, that it was never discussed.  We learned to not ask why, or how, or when.  We simply accepted it as the status quo.  I do not think of myself as racist, but that is a mirage.  Every time I look at someone, I see the color of their skin.  I am trying, daily, to change that.  Some days are better than others.  But I have a lot to learn.

We are taught as toddlers to differentiate -- color; size; taste.  We group things by similarities, and we learn that things we like are "good," and the things we don't like are "bad."  It's part of being socialized and "domesticated," as I read another blogger describe it.  So, then things like me are good, and things not like me are bad.  The transition to race becomes easy.

We have now equipped our police with riot shields, mace, helmets, kevlar, rubber bullets, tasers.  And we treat them as front-line warriors to protect the public from the "bad" guys.  Tell me, how  can we equip warriors and not expect them to act as warriors, when they have not been trained to differentiate between the good guys and the bad guys?  When all they know is what was educated in them as toddlers - "us" and "them"?  And then that education continued, as is readily available in every media, every religious institution, every format?

When is enough, enough?  When is it too much?  When will we accept we are wrong to continue to look at things (and EACH OTHER) as how we are different, and not as how we are the same?
Posted by Morgan Golladay at 9:25 AM No comments: 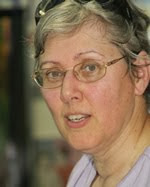 "Art is not about drawing straight lines, with or without rulers. Art is about making connections between the viewer and the artist. It is about emotion, humanity, risk-taking and joy. That is my intention as an artist – to share my voice and my vision with you."